Lots of you are asking how Den is doing and I know there are many of you working hard out there on distance healing and winging energy to us both and I thank you all. Well it has been a roller coaster week since he was admitted into Bournemouth hospital on 5/5/18 and we have been hit with one curve ball after another. Having the heart attack. Then being told on Friday that the CT scan showed that Den’s cancer had come back. Then Saturday, Den had his MRI scan which left him feeling ill and being told that the MRI scan  indicated that the cancer had returned, also didn’t help his morale. This resulted in him being moved into the Isolation Room.  The guys called it the “Cooler” and if you have watched Steve McQueen in the Great Escape, you will know how Den felt. The guys in the ward were just on the verge of tunnelling him out, when Monday afternoon, he was released. We were heading in the right direction!

As you know I am a great believer in signs, and our Grandfather clock decided to stop for some unknown reason at 1244 on Friday. Checking this out on the internet, part of the meaning of 1244 is “You need to regain that old determination and prove others wrong.” My intuition had already told me that the radiologist was wrong and I dowsed when I got home on Friday, to have this confirmed. I immediately rang Den up and told him, which lifted his spirits no end. I was not prepared to accept the cancer decision without Professor Illankovan checking out the scans, which he did today. Well done Prof! We proved them wrong. So that is another step in the right direction! Den is now on the list for transfer to Southampton for the triple by pass. The hospital have said next week, but we shall see (Den has asked me to dowse that too).

Here is a photo of Den returning to his ward from the “Cooler” and you can see Tony in the background. Keith asked me to give his chicken to Den to cheer him up while he was in the “Cooler”. 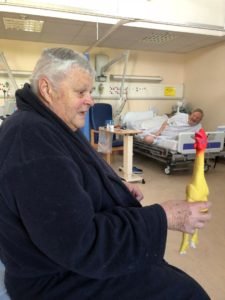 And here is one with Graham in the background.

The New Moon was all about releasing and surrendering, which is what we did in Ceremony last night. My Sisters have certainly delivered. Blessed Be